Many of the people from other clubs I’ve recently spoken with have been bemoaning the slow start to the season, with little or no growth so far to aid the recovery from any turf damage that may have been sustained over the winter months. While it’s true that temperatures across the country have been down a degree or two from the seasonal average, the clubs in Kintyre have been more thankful than ever for the comparatively high winter temperatures that the warm flow of the Gulf Stream send in our direction. While this geographical anomaly undoubtedly brings its own issues (destructively windy, salty issues!) during the shorter days of December and January, there is no doubt that if we follow a sensible and protective off-season maintenance program, we can make the most of the higher ground and air temperatures that we get through these months and hit the ground running at the beginning of the golf season. The consistent putting conditions we saw on all but a couple of our most exposed greens during April and May showed that this policy can work, and we now have the opportunity to build on that progress through the remainder of the season.

We have undertaken a considerable amount of overseeding, aeration and topdressing work on our tees over the last few weeks, and the majority of them have responded well. I felt the condition of the tees let the course down last summer – there was no doubt that we could have made more out of our nutrition and water resources, and as a result, a number of them were very poor going into winter!  The new tees we constructed over the winter have settled in really well, and it’s good to see our recent hard work on some of the others improve them to the point where they can now complement the new ones. We did bite the bullet and patch turf into one or two of them, which was a bit brave considering the dry weather we’ve experienced during May in previous years, but it looks like we have got away with it as these areas have knitted in very well. I really wish now that I had been brave enough to turf the bare areas on the men’s tee at the 6th  at the same time, but in truth I bottled it and will now have to live with it for the rest of the season. We have a plan in place to dramatically increase the size of this very exposed tee which we will implement this winter, as it is far too small to accommodate the hammering it gets from short irons and from the worst of the winter weather.

“WHAT’S THAT FENCED-OFF PATCH OF GRASS OVER THERE FOR, SIMON?” 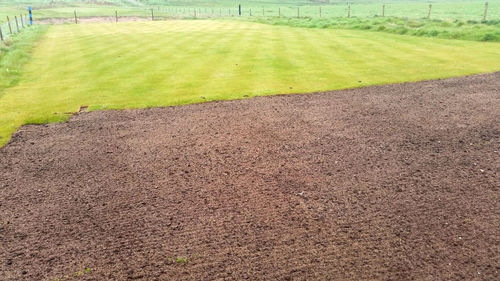 The headline is an actual question from one of our Mach Dunes GC members, and I’m so glad he asked. That would be our turf nursery, situated behind the bank across the road from the carpark. This was one of my first jobs when I started working at Machrihanish Dunes last year, and was a project that Keith Martin had been keen on implementing for a while.

Initially, we scraped and flattened a large 1500sq.m area of sand with a 15 tonne excavator before importing approximately 200 tonnes of sandy topsoil from Langa Quarry next door. We mixed this material with the top layer of sand and spread it evenly over the area, creating a 6-inch deep layer of what we in the industry vaguely like to call “rootzone material.” The physical and nutritional make-up of rootzone material has been discussed in greenkeeping circles at length over the years, with some experts extolling the virtues of lighter, more free-draining soils while others favour heavier mixes with higher levels of nutrients and bacterial colonies. Having a turf nursery at Machrihanish Dunes gives us the opportunity to not only experiment with different species of grass, but also different mixes of soil. If we lay one mix and one species together and it doesn’t work as well as we hoped, then we will lift it, use it for patching fairways and rabbit holes and start again. Before we started this project, we visually analysed what we were seeing out on the golf course by focusing on the areas that performed really well and then attempting to replicate the physical conditions that produced those results. We simultaneously analysed the areas of the course that were not performing so well and tried to pinpoint why these sites saw proportionally less growth of healthy perennial grasses than we would hope for. In almost all cases, the quality of the indigenous rootzone material could be cited as a major factor in the successful growth of the plants we wish to encourage. Molehills are a brilliant way of analysing this; if a mole digs in a weak area where grass growth is sparse, the molehill will almost always be very sandy, whereas the mole that tunnels under a site naturally populated by agricultural meadow grasses and ryes will inevitably excavate a hill of overly moist, nutrient rich, slimy black soil. The mole that produces a mound of light, airy free-draining and sweet smelling “rootzone” mix meanwhile, will quite often have had to muscle his way through a mat of healthy fescue and bent roots to get to the surface! This is flippant of course (and seemingly very obvious), but it is just an example of how we try to step back occasionally and see how we can use natural processes to our own maximum advantage. Fighting against nature will inevitably lead only to expensive failure. 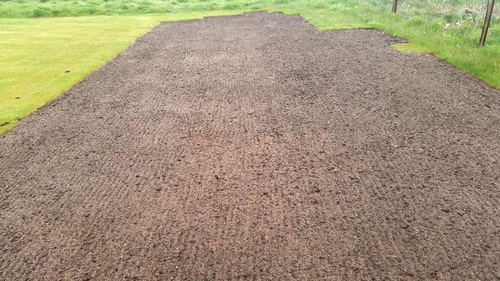 An area of turf has been lifted to patch tees and fairways, and has been replaced with a new layer of rootzone. This has again been seeded with Bar Trio fescue seed.

Having an area of nursery at our disposal that we can use to experiment with rootzones as well as with grass species and their cultivars will prove to be highly beneficial, and will increase our chances of guaranteeing future success when we undertake construction projects out on the golf course. This will hopefully keep our construction costs down as we can use materials indigenous to the site and local area that we know to work from our own experimentation, rather than buying in expensive materials from the Central Belt on the basis of laboratory analysis alone.

We currently have three species of grass growing in the nursery in a comparatively rich rootzone mix. There is a very small strip of A1/A4 creeping bentgrass at the Easterly end, which was seeded at 15 grams/sq.m into a sandy mix that we used to try and replicate the rootzones under the existing greens and tees. As we headed West, the next 20% was seeded out with a dwarf perennial ryegrass, something we have used previously in tees and under the mats on pathways. Ryegrass is extremely hard-wearing, but in its original, agriculturally beneficial form was very wide-leaved, ugly, and difficult to integrate into sportsturf. If you’ve ever been to a course where the green aprons are full of tufty “hedgehogs” of seemingly unmown, unkempt grass, then you know what I mean.

Although this dwarf variety is a massive improvement over any rye I have tried to grow before and seems to grow healthily at 10mm on a relatively weak rootzone without much input from fertiliser and water, I have been a bit disappointed by its sparse growth and anaemic colour. Granted, I could feed it a bit more, but that kind of defeats the purpose of our experiment.  I would not do that on large areas out on the golf course for budgetary reasons. What I have done with this patch now is seeded some hard fescue into it, as I want to see whether the two grasses can integrate better to form a closer-knit turf. I have had a lot of success growing hard fescue on tees and fairways in past years, and there is a lot of it naturally occurring in the fairways at Machrihanish Dunes, which proves to me that there is potential for me to use it here to my advantage. Time will tell whether this mix could mature into a really bulletproof turf for patching tees and fairways, or whether the rye will aggressively crowd out the fescue and take over. Again, I could not experiment with this out on the course, as I know that turf managers have tried in the past to integrate perennial ryegrass into links fairways in order to thicken up the sward only to find they have integrated countless hedgehogs instead!

The remaining 50-60% of the nursery area was seeded with good old creeping red fescue, the finest links grass money can buy. This particular batch is Bar Trio – three cultivars specifically chosen by our suppliers at Barenbrug for their salt resistance and dark year-round colour. It is the mix I would automatically use to overseed greens at Machrihanish Dunes, but having the ability to experiment with it on different strengths of rootzone in a nursery has already given me more of an understanding of what it needs to grow at an optimum level. We had such immediate success growing this mix of fescue cultivars on the rootzone we mixed that we used a similar sand/Langa soil mix under the tees we constructed last winter, and the nursery turf itself has matured so quickly that we are already using it for patching fairways and tees even though it is not yet a year old. We will continue to bring it to maturity over the course of this season; topdressing and overseeding whenever we have the opportunity, and will then use all of it this winter and start again next spring.

The nursery is always cut at the same height as the tees (10mm), so I would not envisage any of our own turf ending up on the greens. We could grow turf for greens, but the maintenance and input requirements for greens turf is much higher than it is for tees and we would therefore need to spend a lot more time and money on the nursery than we actually feel it is financially responsible for us to do. Mowing the nursery 2-3 times a week and adhering to a similar fertiliser and topdressing program to the tees has given us a good happy medium, allowing us to replicate on-course conditions and providing us with a useable resource while avoiding escalating costs. This has been, and is continuing to be, a worthwhile project.

HOW TO IDENTIFY TURF NURSERY GRASSES
(or, How to Impress Your Friends and Look Smart!) 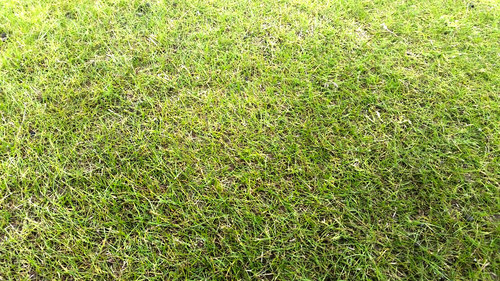 Creeping red fescue, the grass at the westerly end. 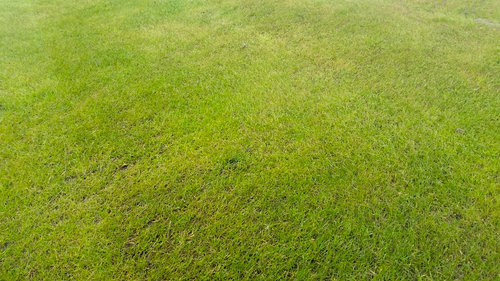 Dwarf ryegrass with some hard fescue in the middle section.

Anybody who wishes to have a closer look at the turf nursery at any time is absolutely welcome – it is fenced from the rabbits, not from you! We will keep on experimenting with this and taking the things we learn from it out onto the golf course, ever hopeful that we can improve the surfaces we can provide for you on a daily basis. We hope you all enjoy your golf during June. Maybe this will be the month when summer finally arrives!